The Avon Property Owners Association is now offering a $1,000.00 reward for information leading to the arrest and conviction of the person or people responsible for stealing the “Welcome to Avon” sign, per an August 4 update from the Dare County Sheriff’s Office.

The Sheriff’s Office received a report from a local Avon resident on July 31 that the sign on the north end of Avon that reads “Welcome to Avon, Historically Named Kinnakeet” had been stolen sometime on or around July 30. (An identical sign on the southern end of the village is still in place.)

This sign is approximately 6 ft. by 4 ft. and would have taken a moment to remove and steal, since it was bolted to the posts that were left behind.

RALEIGH, N.C. (WNCN) — On Friday morning the suspect accused of killing a teen girl in August 2020 agreed to a plea deal, the victim’s… 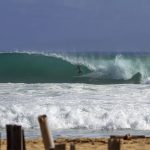 This Friday, Downtown Books will be hosting Hannah Bunn West the author of Remarkable Women of the Outer Banks, one of Summer 2022’s most popular…