Millions in payments by Smithfield Foods to North Carolina can be routed to grants for environmental enhancement projects and are not civil penalties that must be designated for schools, the state’s high court ruled last week.

The Supreme Court ruled Friday that the North Carolina Court of Appeals acted prematurely when it allowed the New Hanover County Board of Education to raise on appeal a new claim that had not been argued in a lower court.

The 6-0 decision means money paid out from a 2000 settlement between the pork giant and then-Attorney General Mike Easley may continue to be funneled to the state’s Environmental Enhancement Grant, or EEG, program.

That program was established in 2001 by Gov. Roy Cooper, who was at that time attorney general, as a way to disburse funds collected under the Smithfield Agreement.

Under the terms of the agreement, Smithfield and its subsidiaries agreed to pay up to $2 million each year for 25 years to a savings account where the money is held until it is distributed by the attorney general to environmental enhancement projects.

Francis De Luca, former president of Civitas Institute, a Raleigh-based conservative policy organization, filed a complaint in Wake County Superior Court in fall 2016 alleging the payments made as part of the agreement were civil penalties and, per the state Constitution, the funds should go to county schools. De Luca added the New Hanover County Board of Education as a party plaintiff in early 2017.

De Luca eventually removed himself from the case, one that has played out like a back-and-forth tennis match of the Court of Appeals and Supreme Court.

“This is hopefully the last time that the courts have to hear arguments about the Environmental Enhancement Grant Program,” Blakely Hildebrand, a staff attorney with the Southern Environmental Law Center said in a telephone interview Monday.

The law center represented the nonprofit North Carolina Coastal Federation and Sound Rivers Inc., which joined the case in 2017 in support of Attorney General Josh Stein.

Stein had moved the annual payments from a private bank account to the Office of State Treasurer out of abundance of caution before the Court of Appeals’ December 2020 ruling that the money had to be paid into the treasury or the general fund.

That ruling reversed the state Supreme Court’s April 2020 ruling in favor of the attorney general’s office and that the payments did not constitute penalties.

In the split decision, Judge Philip Berger Jr. and Judge John Tyson had ruled that N.C. General Statute 147-76.1, referred by some as the “gift statute,” applies to present and future funds paid under the agreement and that the law mandates those funds be deposited into the treasury.

Cooper signed that bill into law in 2019, some three years before the lawsuit was filed in Wake County Superior Court.

Dissenting Judge Wanda Bryant noted in a separate opinion that the appellate court’s ruling was premature and that the board of education’s claim should first be argued in a trial court.

The split decision entitled the parties to get another hearing before the Supreme Court.

Berger, an associate justice in the Supreme Court, did not participate in that court’s deliberations on the case.

Associate Justice Sam Ervin IV wrote that the board of education can choose to file a new lawsuit to argue where the money should be routed.

“We are very pleased with the outcome of this decision and we’re glad that this really important program can continue to operate for the next several years in a way that benefits communities and the environment in North Carolina,” Hildebrand said. “This program is really important to particularly the environment and also to the nonprofit organizations that do the hard work under this grant program.”

To date, the attorney general’s office has awarded nearly $37 million to more than 190 projects in the state. Those projects include wetland restoration, land acquisition, stormwater remediation, stream stabilization, and environmental education and research initiatives.

Since the program launched, 240 abandoned hog lagoons have been closed and more than 31,000 acres of land and wildlife habitats have been conserved or restored, according to the attorney general’s website.

The program awards $5,000 up to $500,000 in grants for a three-year project and grants are available only to nonprofit organizations, including academic institutions and government entities. 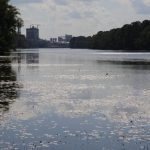 Ecolab Inc., a log fumigation company in New Hanover County, and Flowers Timber Co. Inc. in Wayne County have been issued air permits from the…