RALEIGH – Elizabeth S. Biser affirmed Thursday her oath of office as secretary of the state Department of Environmental Quality during a ceremony at the department’s Green Square building.

The Honorable Mark Davis administered the oath with Biser’s family, friends and senior DEQ staff in attendance. Her appointment is subject to confirmation by the North Carolina Senate.

“I am honored and humbled at the opportunity to lead the agency charged with providing environmental stewardship for the health and prosperity of all North Carolinians,” said Biser in a statement. “Returning to this department and taking the oath of office in this building has special significance.”

Gov. Roy Cooper announced Biser’s appointment last week, citing her strong leadership, experience with the environmental agency, and knowledge of DEQ’s critical work in the state, according to the release.

Biser previously served as the director of Legislative and Intergovernmental Affairs at DEQ’s predecessor agency, the North Carolina Department of Environment and Natural Resources. During her time there, she played a primary role in securing $134 million in funding for the design and construction of the Green Square Complex in downtown Raleigh, which includes the LEED-certified central offices for DEQ.

She holds a bachelor’s and a master’s of public administration from the University of North Carolina at Chapel Hill.

N.C. drought map for May 13, 2021. Drought has returned to North Carolina for the first time in more than a year. The North Carolina…

A screen capture from The Town of Southern Shores’ ‘No Cut Through” video. [YouTube] With this weekend’s traffic expected to be the peak of the…

Join us on October 22, 2022 for the 6th Annual OBX Brewtag at the Outer Banks Soundside Event Site!   A celebration of flight and beer, OBX Brewtag… 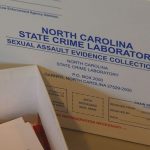 The Durham Police Department’s Cold Case Sexual Assault Unit has filed charges against nearly a dozen people who are connected to 15 sexual assault cases that date back more than 35 years.