The sea robin is one weird-looking fish. They have some of the largest pectoral fins of any bottom dweller I have ever seen in the Atlantic. When fully extended, they look like a single-engine Cessna’s wing, except underwater and on the bottom. These fish also have adapted pectoral fin rays just below their gills that have evolved over time into crab-like feelers that this species uses to probe for food on the sea floor.

“In North Carolina, there are 16 documented species of sea robin, counting those in deep water, but only four are typically seen in the estuaries and nearshore waters. The sea robins are related to other large-finned fishes in the scorpionfish and gurnard families,” said Dr. Steve W. Ross, a research professor at the University of North Carolina Wilmington.

Based on multiple years of sampling the seafloor near the coast, the most common species are leopard sea robin and northern sea robin.

“Those two species are fairly common on muddy/sandy nearshore and estuarine bottoms in North Carolina. Also common in the same areas are striped sea robin and bighead sea robin. We also saw blackwing sea robins on rare occasions. In my experience, they seem to be rare in shallow estuarine water, but they do occur in deeper areas of the estuary,” said James W. Morley, assistant professor, Department of Biology, Coastal Studies Institute, East Carolina University.

“I’ve had them in aquaria before. They are fun to watch, as they taste and search for food with their adapted pectoral fin rays. They move them around like fingers in the sediment. I also would use them for dissections in an ichthyology class. They are one of a couple groups of fishes that have a specialized muscle attached to their gas bladder to make noise,” he said.

All sea robins are capable of making a noticeable croaking noise when taken out of the water.

The northern sea robin is also known as the common sea robin. They are found from Nova Scotia south to Florida and into the Gulf of Mexico. Its coloration is a mix of red, gray and brown, with dark blotches along its back. The bottom of the fish is a dirty white or pale yellow. This species usually grows to a length of between 12 and 16 inches.

They prefer a smooth, hard-packed bottom of an open bay. In North Carolina they are usually caught between May and October.

“They are present in the coastal ocean all year long, but somewhat less abundant during the winter months. This is similar to leopard sea robins,” said Morley.

It is easy to identify the northern sea robin from the other three species outlined above. This fish has a large, bulbous, spiny head and body that tapers down to the tail. It has a rounded, fanlike pectoral fin that is quite large and extends horizontally like an airplane wing. The three lower rays of the northern sea robin’s pectoral fins are long, crab-like leg feelers used to walk along the bottom and to search for and find food on the bottom. The front portion of the head of the northern sea robin, as well as most other sea robins, has bony plates, which they use as a shovel to dig up different types invertebrates from the bottom to eat. There is a small spine in its nose.

The northern sea robin’s eyes are pretty with a peacock blue coloration, like those of a cute puppy. These features help identify this species from a similar looking fish, the sculpin, which is not found in North Carolina waters, but are found farther north along the East Coast.

Northern sea robins are usually found swimming in areas of hard to smooth bottom types, but are not typically seen by scuba divers on rocks or in the mud. These fish constantly swim along the bottom in search of food. When threatened, they will bury themselves in the sand, showing only their eyes and the top of their heads.

The northern sea robin will eat a wide variety of invertebrates, including squid, crabs, shrimp, amphipods, segmented worms and mollusks. It has also been known to take a bite from any bait, giving the impression they are not picky eaters. Since they are well-known bait thieves, fishers often consider this species a nuisance. Still, some find these bottom-dwellers good to eat and harvest them mainly by hook and line.

The striped sea robin is found in the western Atlantic from Nova Scotia south to Florida, however, it is a rare find north of Cape Cod. I have never seen, or photographed this species anywhere north of the Cape Cod Canal. This species is easy to tell apart from the northern sea robin because of their horizontal black stripes that run the length of the body from just behind the gill plate back to the tail. Other than the differences in coloration and pattern along their bodies, they look quite similar in size and in shape to the northern sea robin.

In North Carolina, this species is usually found on sandy bottoms in estuaries and nearshore waters down to 590-foot depths. Like many species that are found along the East Coast, the striped sea robin spawns in late spring through summer and migrates into deeper waters and southward during the winter months. Their large fan-like pectoral fins are used to soar over the bottom and churn-up sediment to find prey.

This species reaches maturity at 2 to 3 years old.

Sea robins are known for their sound-producing abilities. A variety of sounds have been documented including clucks, growls and clicks. Little is known about why these fish make such noises. The strange sound has been observed more commonly during the spawning season and is believed to be related to the spawning act. Sea robins have large swim bladders that they vibrate using a combination of muscles and fiber-like attachments.

The leopard sea robin’s body is long and slim. Its head is large in proportion to the rest of its body and has a bony ridge and spines like its close relatives. Its eyes are narrowly spaced. You can distinguish this fish from both the northern and striped sea robin by the darker, leopard-like spots all over its body. This species has brown or orangish spots on lighter body, and its underside is white, with occasional softened bands on both sides. The dorsal, tail and pectoral fins all have brown to orange spots, with the anal fin having white on the ends, with the body having a translucent, darker stripe in-between. The pectoral fin is large and wing like, with the bottom three rays adapted into the feelers mentioned above. The first dorsal fin has two black spots, one between the first and second spines, the other between the fourth and fifth spines. Its throat has no visible scales.

The leopard sea robin tends to be more slender than other sea robins and is the only one with two dark spots on its first dorsal fin. Other sea robins either have one spot or none at all. This species will grow to lengths of about 10 inches and is one of the smaller sea robins seen in North Carolina waters.

Unlike the northern, or striped sea robin, the leopard sea robin prefers to live in bays in shallow waters.

The bighead sea robin also has an elongated body with a large head in proportion to the rest of its body. Bighead sea robins have a large head with a bony ridge and spines, however, the distance between the eyes is greater than the other species discussed here. Their coloration is dark with greenish to gray mottled coloring on their back and some body markings with black or dark and light spots.

The bighead sea robin has a black bar below the soft dorsal fin and a whitish underside. The first dorsal fin has a black spot, the large pectoral fins is winglike, with the lower three rays used like fingers to search for food like its cousins. The pectoral fin is dark with lighter bands, no spots, sometimes with yellow edges, white edge on underside of pectoral fin.

Bighead sea robins also prefer gulf and bay habitats. They grow to a maximum size of about 14 inches in length.

“There are an additional 12 members of the sea robin family that occur in estuarine to offshore waters of North Carolina, but several of these  are usually found out on the continental shelf and slope and typically are not caught by regional fishers. Four of these in the genus Peristedion are often split out into a separate family (the armored sea robins) by ichthyologists, and they also only occur in very deep waters. Although sea robins may be encountered around natural hard bottoms and artificial reefs, they are usually restricted to sandy or muddy bottoms where they are uniquely adapted to that habitat,” said Ross.

Sea robins are “quite beautiful,” Ross noted, and they often display a wide range of colors, with many of the deep-water species being almost entirely red.

“I have kept them in aquaria where they are fascinating to watch, especially when they explode from hiding in the sand to grab food. They are an important component of marine and estuarine ecosystems,” Ross said.

Sea robins are not managed by the state or federal governments, and their populations or fishery landings data are not monitored.

Image of Miss Katie entering Wanchese Harbor on August 19, 2022. As mariners look ahead to the spring fishing tournament season, the Dare County Waterways… 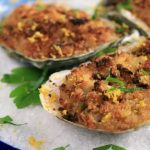 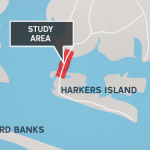 Contract crews will begin working at night this week to replace two bridges to and from Harkers Island to accelerate construction. Graphic: North Carolina Department…