WILMINGTON – New Hanover County commissioners tabled a decision Monday night on whether to approve a request to create a new zoning district that would allow the potential development of a trio of high-rise condominium buildings on the west bank of the Cape Fear River.

Commissioner Chair Julia Olson-Boseman announced the board was tabling their decision shortly after the 4 p.m. meeting began in the assembly room of the New Hanover County Historic Courthouse.

Roughly 30 people sitting in the packed room stood up, walked out, and gathered outside on the sidewalk, where Historic Wilmington Foundation Executive Director Travis Gilbert addressed the crowd.

“We just really appreciate everybody’s enthusiasm and attendance today,” he said. “This was one of the results that could have occurred today. They’re looking to have a work session with not only the New Hanover commissioners but the planning board and planning staff and we have indications that they’re going to ask staff to bring in experts for their first of many work sessions to guide us on all the issues with that property. In the coming weeks we’re hoping that the coalition of nonprofit organizations and advocates and scientists can engage our county commissioners during these work sessions to update the county staff on what our community envisions for that subject property.”

The historic foundation is one of several environmental and historic preservation groups that have formed a coalition opposing the proposal to amend the county’s Unified Development Ordinance, or UDO, to include a Riverfront Urban Mixed-Use Zoning district.

Developers have made that request so they can then ask the county to rezone a little more than 8 acres from light industrial to make way for the possibility of building a complex of three high-rise condominium buildings called the Villages at Battleship Point.

Opponents of that request and the proposed development argue the property is in an environmentally and culturally sensitive area.

The property is within a Federal Emergency Agency Management, or FEMA, floodplain, an area where flooding conditions are being exacerbated by sea level rise.

The part of the river on both sides of the property is a primary nursery area, or PNA, a designation determined by the North Carolina Marine Fisheries Commission. The commission designates PNAs to protect habitat, particularly along bottom areas, including sand, mud, sea grasses and oyster rocks.

The land is included in the Gullah Geechee Cultural Heritage Corridor, a national heritage corridor that recognizes the culture of the descendants of Africans enslaved on rice, indigo and sea island cotton plantations of the lower Atlantic Coast.

The land also includes an archeological resource recorded by the North Carolina Office of State Archeology in April 1979.

Kemp Burdette, Cape Fear Riverkeeper with Cape Fear River Watch, told the group Monday that, though the commissioner’s decision to table a decision “feels a little bit like a let-down,” the opposition’s presence at the meeting made an impact.

“It was really important to show this kind of community opposition,” Burdette said. “They saw that entire courtroom up there empty out. They understand how much we’re invested.”

On a beautiful spring day at the courts, an improved First Flight tennis team won their final game of the season at home against Currituck…

Hurricane Dorian made landfall on southern Hatteras Island on Sept. 6, 2019. [NOAA image] The first long-range forecast for the Atlantic basin is calling for…

Our focus for this “Getting to Know” installment is on our youngest subject to date. Logan Alexander Marshall won’t turn 21 until October. But…

Pioneer Theatre Manteo, NC Now showing at the Pioneer Theater- The Wizard of Oz, starring Judy Garland. This feature will play nightly, at 7pm, through… 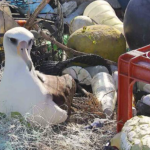 An albatross in a field of marine debris. Photo: Andy Collins/NOAA A new mobile app gives observers in North Carolina, South Carolina and Georgia a…