Virginia Gov. Ralph Northam announced Monday that the Port of Virginia has agreed to lease a portion of the Portsmouth Marine Terminal to Dominion Energy for infrastructure related to development of its proposed 2.6-megawatt wind energy project off Virginia Beach.

Dominion Energy is to lease 72 acres at the Portsmouth Marine Terminal for 10 years at about $4.4 million per year to use as a staging and preassembly area for foundations and turbines that are to be installed 27 miles off Virginia Beach. The company said the project will generate enough electricity to power as many as 660,000 homes during peak times.

“This announcement is yet another milestone toward making Virginia the national leader in offshore wind power,” said Northam. “The Commonwealth and Dominion Energy are standing together to promote clean energy, reduce carbon emissions, create jobs, and build a new American industry on the East Coast of the United States.”

“It has deep water access, no overhead restrictions, a strong, experienced maritime workforce and sufficient space for these large wind infrastructure components. It is perfectly situated to serve the Virginia offshore wind project and grow the domestic supply chain needed to complete other offshore wind projects in the United States,” he said.

The announcement came as Northam and Blue spoke at a three-day global conference at the Greater Richmond Convention Center.

The lease includes an option for two, five-year renewals and calls for significant upgrades to be sure the terminal can handle the weight of the project’s large components.

Virginia created a law in 2020 that sets a target of 2034 for producing at least 5,200 megawatts of energy through offshore wind and a target of 2045 for achieving 100% carbon-free energy production.

OBX Room In The Inn Online Bidding April 1-30. Our mission is to provide food, shelter and support services to the homeless men and women… 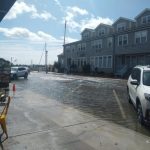 This photo from September 2020 shows a flooded Front Street in Beaufort during an extreme high tide. Photo: N.C. King Tides Project Like many local… 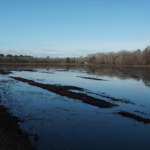 Flooded cropland near Lake Mattamuskeet. File photo A recent ruling to end the Navigable Waters Protection Rule, reverting back to the pre-2015 definition of “waters…

From May 24-June 22, 2022, Cape Hatteras National Seashore  invites public input on two separate projects at and near the Cape Hatteras Lighthouse. Full story…