The public is invited to review and comment on a proposed redistricting plan for New Bern.

Redistricting became necessary after data from the 2020 U.S. Census showed unbalanced growth among the city’s wards, a common problem as cities and towns expand, according to the city.

The proposed changes can be viewed online.  A survey is included at the bottom of the page for feedback.

A public hearing on the proposed redistricting plan is scheduled for 6 p.m. Tuesday at city hall during the board of aldermen meeting.

Updated census information is published by the federal government every 10 years. In North Carolina, general statutes require municipalities with districts, or wards, from which public officials are elected, to look at population numbers to determine if there are imbalances within those districts, city officials said. With New Bern’s growth over the last decade, the city’s wards require adjustment. The goal with redistricting is to proportionately balance the population with consideration given to community contiguity and racial equity.

“New Bern continues to grow, particularly to its northwest and south,” said Mayor Dana Outlaw in a statement. “While we welcome that growth, from time to time it means we must redraw our wards. These changes could impact your voice in the next election and your representation within the Governing Board, so we encourage the public to participate in the redistricting process.”

The board of aldermen worked with leadership and staff to create a draft map of proposed changes, with a 10% population differential, according to the city.

GIS staff designed the map and presented the changes during the Sept. 14 board meeting. Under the current proposal, every ward would see some changes and around 1,700 people will be affected.

Once the public has an opportunity to review and provide feedback on the maps, the board of aldermen is expected to vote on a resolution to adopt them. The final maps are to be be drawn and the Craven County Board of Elections and all affected registered voters are to be notified of those changes.

Printed maps and handheld paper copies can be viewed at the following four locations: 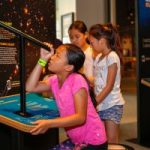 Students check out part of the “Sun, Earth, Universe” exhibit. Photo: Contributed An interactive museum exhibition about Earth and space science is opening up at…

After almost two years of double-digit increases nationally, many experts thought home price appreciation would decelerate or happen at a slower pace in the last…