AHOSKIE, N.C. (WNCT) — The North Carolina Bureau of Investigation is investigating an officer-involved shooting after a man tried to run from Ahoskie police officers.

Ahoskie Police Chief Troy Fitzhugh told WNCT officers received a call at 10:06 p.m. from Pine Street saying a man nicknamed Pat-Pat had a gun and was saying he wanted to shoot someone.

Officers got a second call at 10:47 p.m. from the area of Burden Street where saying the same man was assaulting a female and he had a gun.

The man nicknamed Pat-Pat was identified as Patrick Riddick.

When officers arrived, they chased Riddick through a residential area and told him to stop, but he continued running.

When officers caught up with Riddick, they could see he had a gun in his waistband.

Riddick reached for the gun while officers tried to take him in to custody.

One officer deployed his taser and the second officer shot Riddick in the hand as he was pulling out his gun.

Riddick was transported to Vidant Hospital with non-life threatening injuries.

Officers are remaining with Riddick until he is released from the hospital to transport him back to Ahoskie to be charged.

Per Ahoskie Police Department Policy, when an officer has to use his firearm, the NCSBI is called in to investigate the shooting.

The officer who fired the weapon was placed on administrative leave until the investigation is complete. 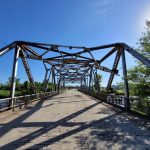 The bridge over Smith Creek in New Hanover County is scheduled to be demolished beginning next week. Photo: NCDOT Demolition is to begin next week…

During its meeting on Jan. 11, the Kill Devil Hills Board of Commissioners unanimously approved a project by SAGA Construction that will include 14 four-…

Ahead of elections this fall, the League of Women Voters of Dare County offers the nonpartisan election resource VOTE411.org. Full story Add to favoritesCredit: Original… 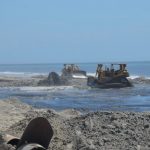 Carolina Beach during a past nourishment project. The Army Corps of Engineers announced last week funding for Carolina Beach and Kure Beach projects to take…